Allografts, such as human heart valves, are anatomically perfectly adapted to their purpose. Therefore allografts, also known as "homografts", generally show good long-term results. The disadvantage of conventional allografts is that they can be recognized by the immune system. This can lead to a loss of function of the graft and may require reintervention or reoperation.

During "decellularization" the cells are removed from the homograft. The cell-free allograft retains its original shape and full functionality. While cell markers determine the individuality of each person, the connective tissue is not immunologically individualized. Cell-free allografts are very rarely rejected by the recipient.

Discover more in this slideshow about the Xellfree®-process. 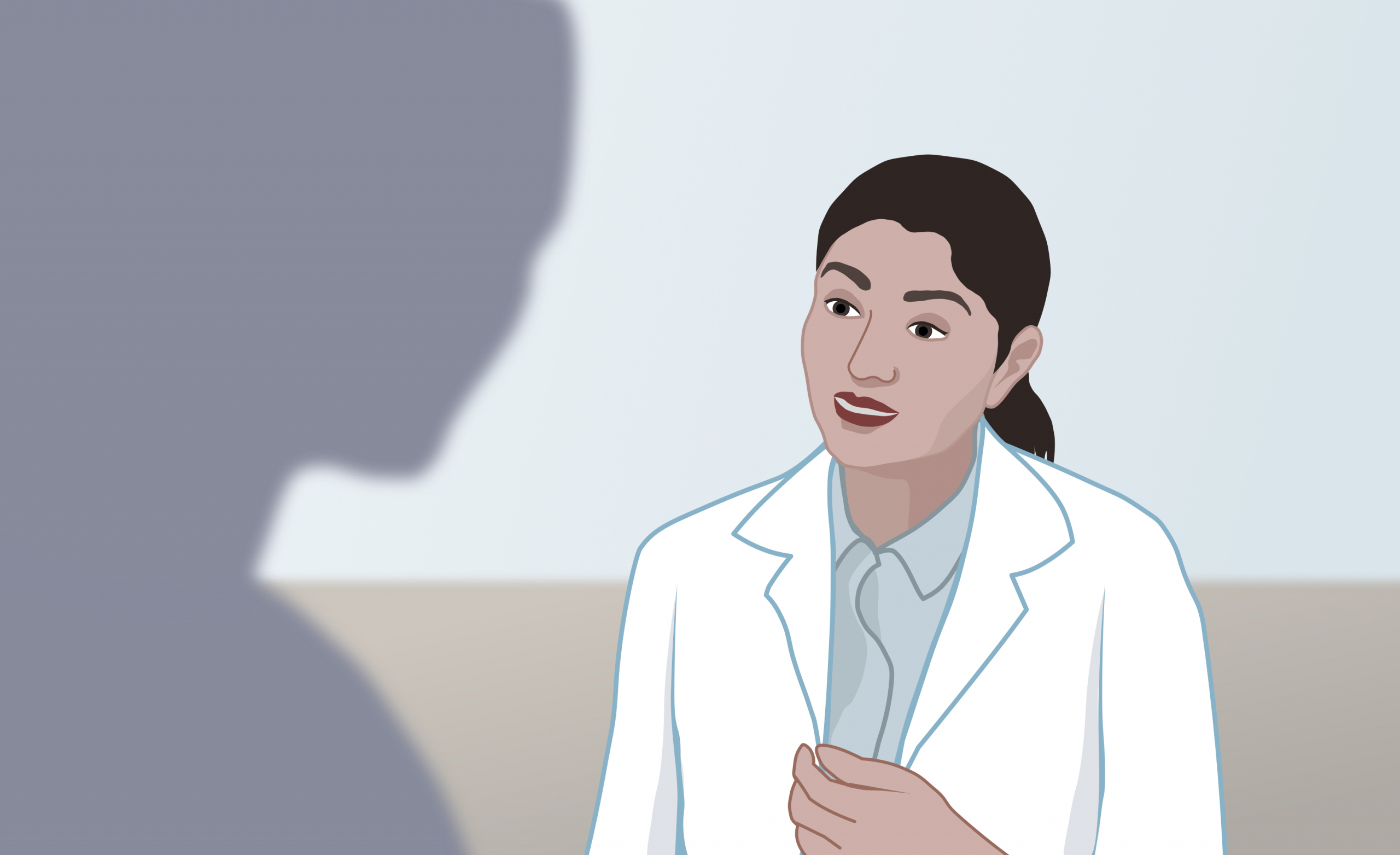 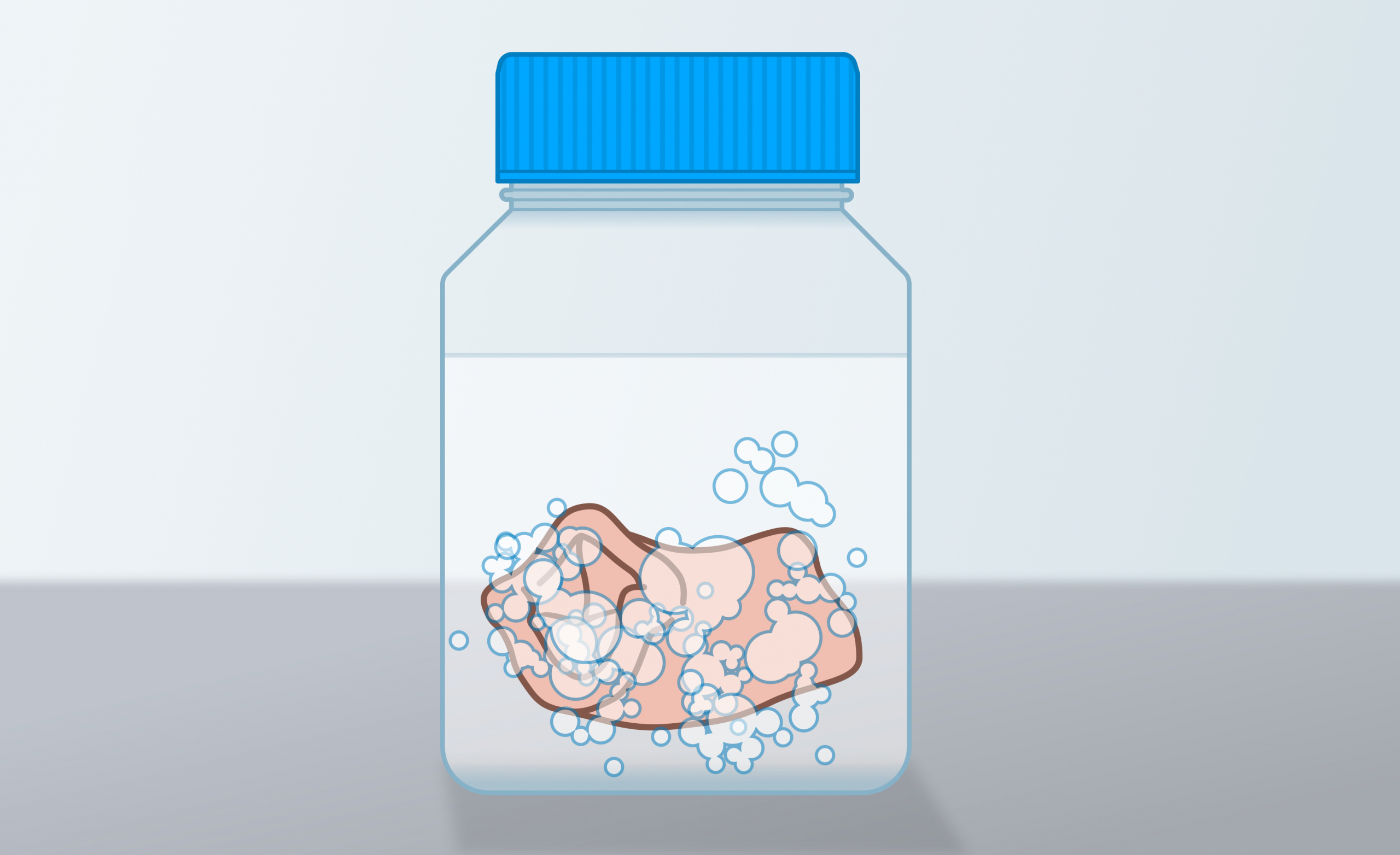 The allografts are processed in the highest clean room class (Class A). Care of the employees and very high hygienic and technical standards prevent contamination during processing. We regularly sample the contact surfaces in order to detect microbial contamination at an early stage and push it back. 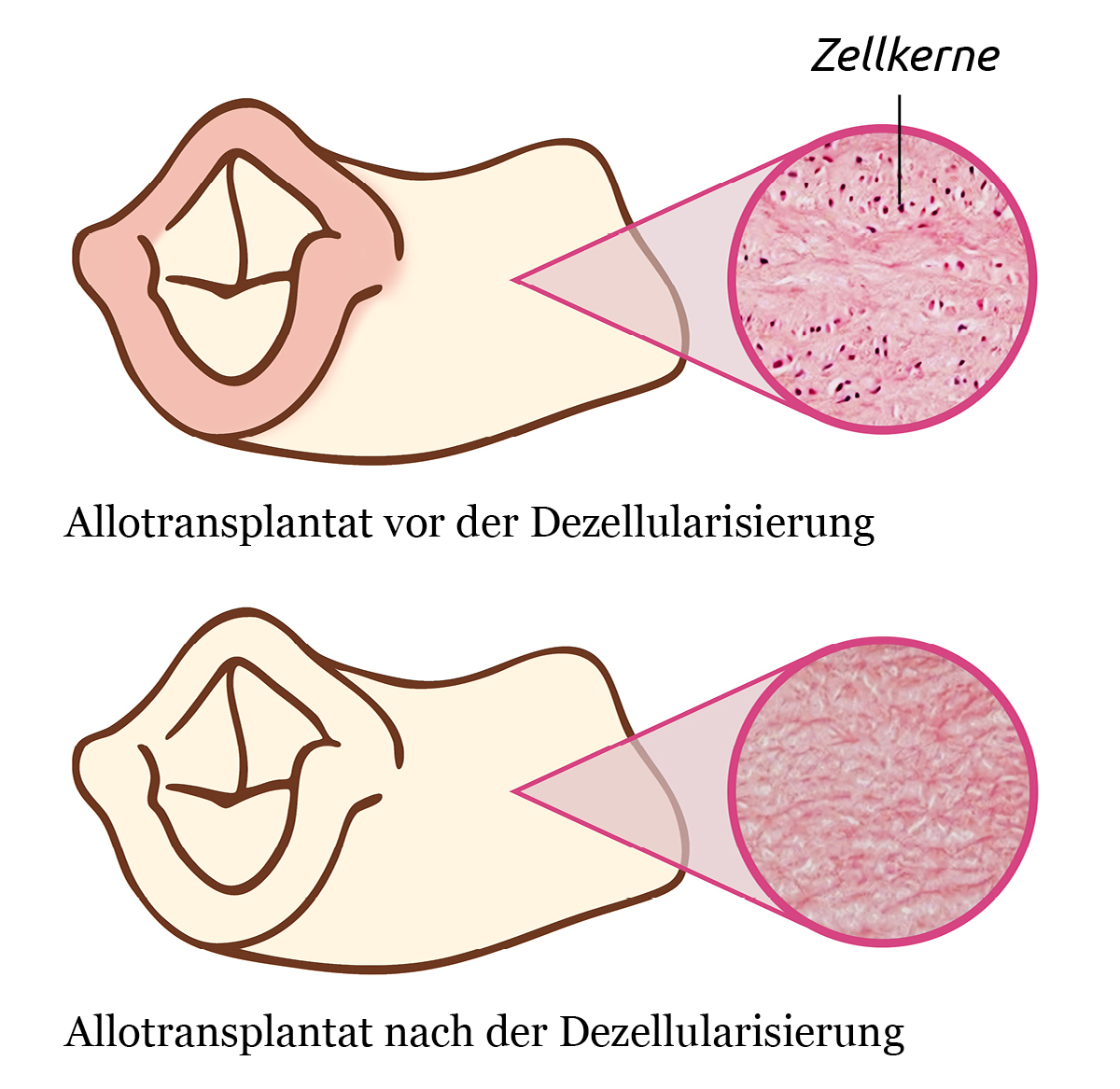 Before we deliver a cell-free allograft, tissue samples are histologically examined by an independent specialist in pathology. No intact cell nuclei must be detectable in the cell-free tissue sample.

Double-stranded DNA (dsDNA) is a component of the cell nuclei and thus a surrogate parameter for cell density. The dsDNA mass in the arterial wall varies greatly from tissue donation to tissue donation (150-4,250 ng/mg, n=40). In the literature, "cell-free" is defined as ≤50 ng dsDNA per mg tissue (Crapo et al., Biomaterials. 2011 Apr; 32(12):3233-43). Xellfree®technology is more sophisticated: after decellularization, only ≤25 ng dsDNA per mg of tissue may be detectable. The residual content in >90% of all cell-free allografts (n=641) is even only ≤10 ng/mg. 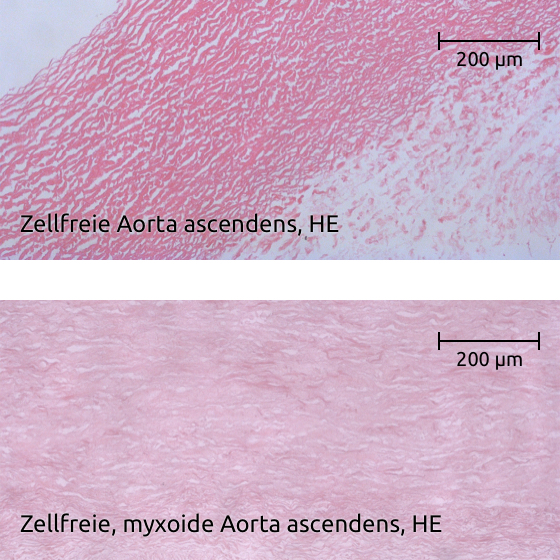 Each individual allograft is histologically examined by an independent specialist in pathology. The extracellular matrix must have a fibrous structure that suggests a healthy donor. Allografts with e.g. myxoid fiber structure are rejected. 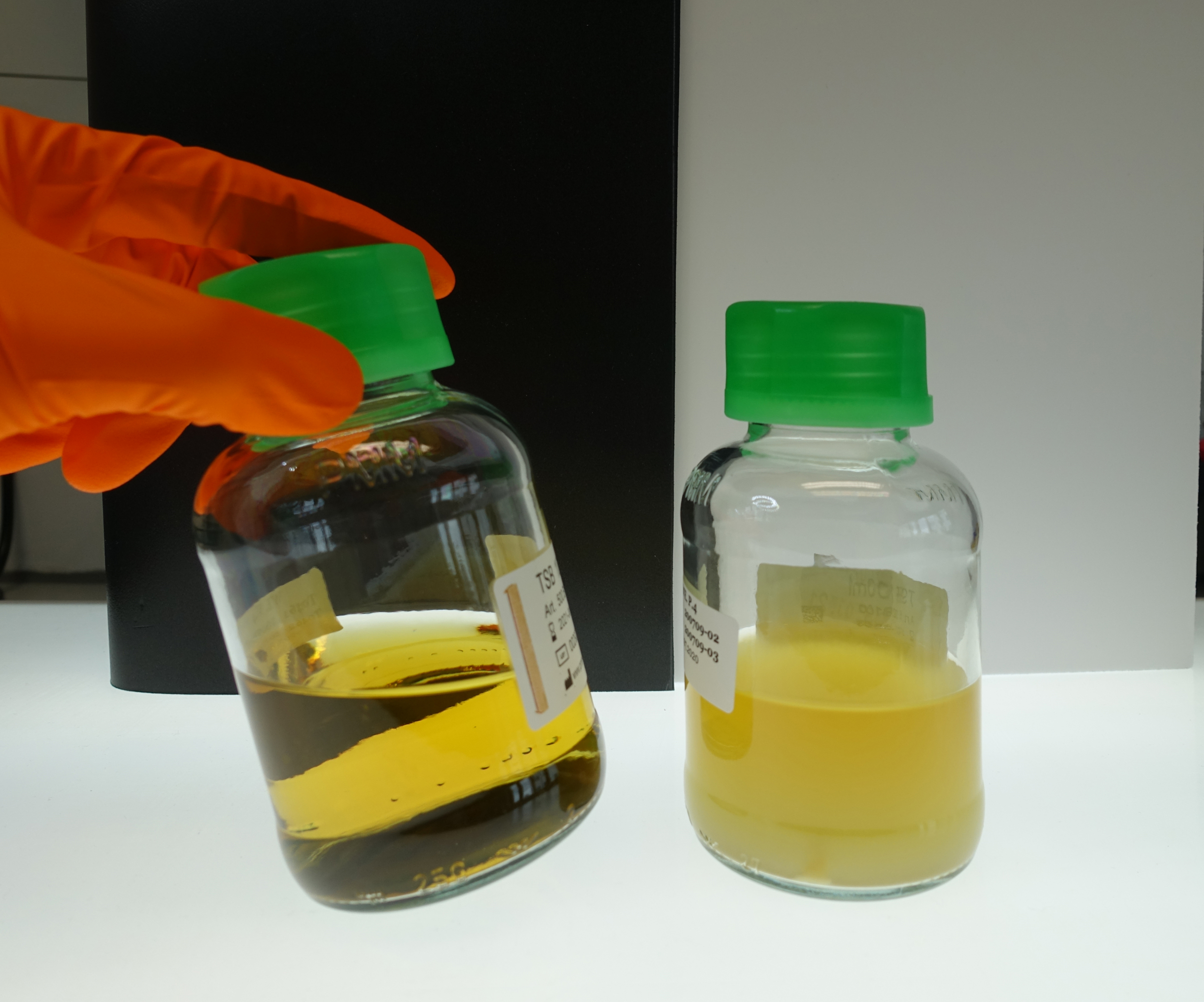 Every cell-free allograft is processed aseptically. Terminal sterilization would denature the allograft and destroy its regenerative potential. At the end of processing, samples are taken from each allograft, incubated for two weeks in culture media under optimal conditions and then tested for sterility. We only give aseptic, cell-free allografts. 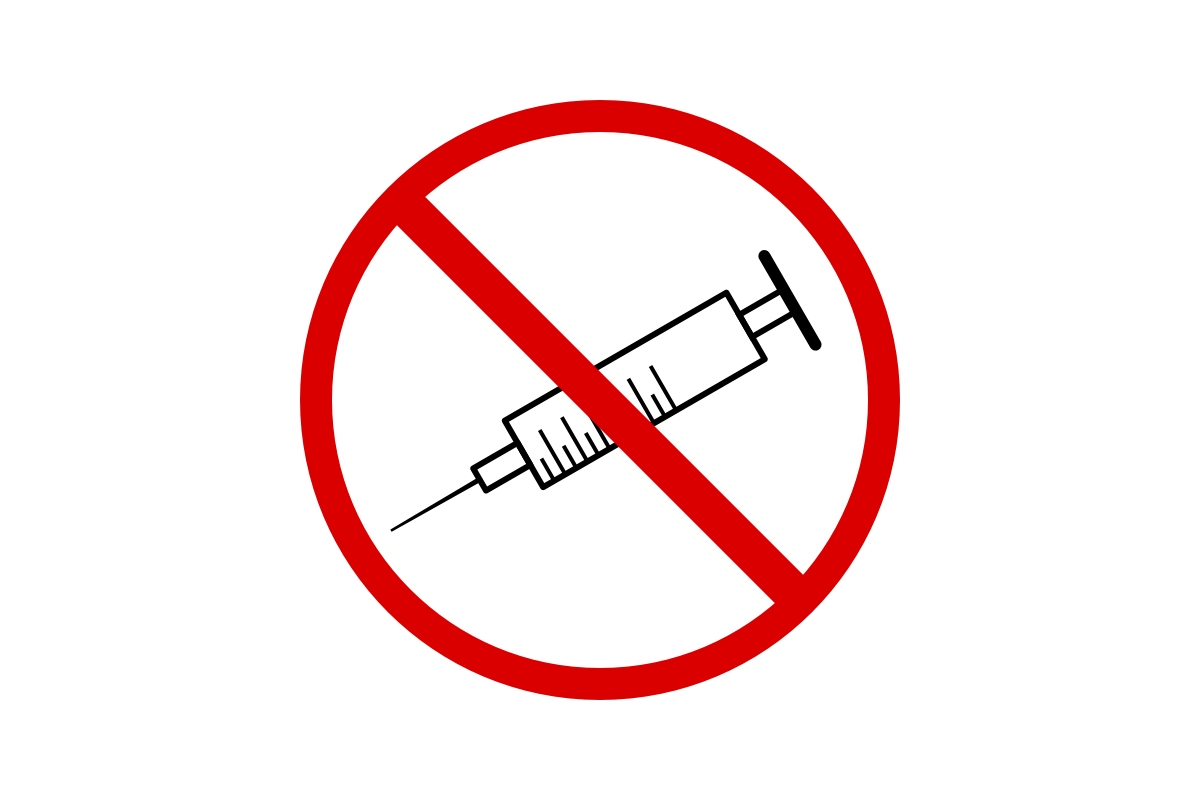 Conventional allografts (homografts) are treated with a high-dose antibiotic cocktail and then frozen. The Xellfree®process does not require antibiotics. 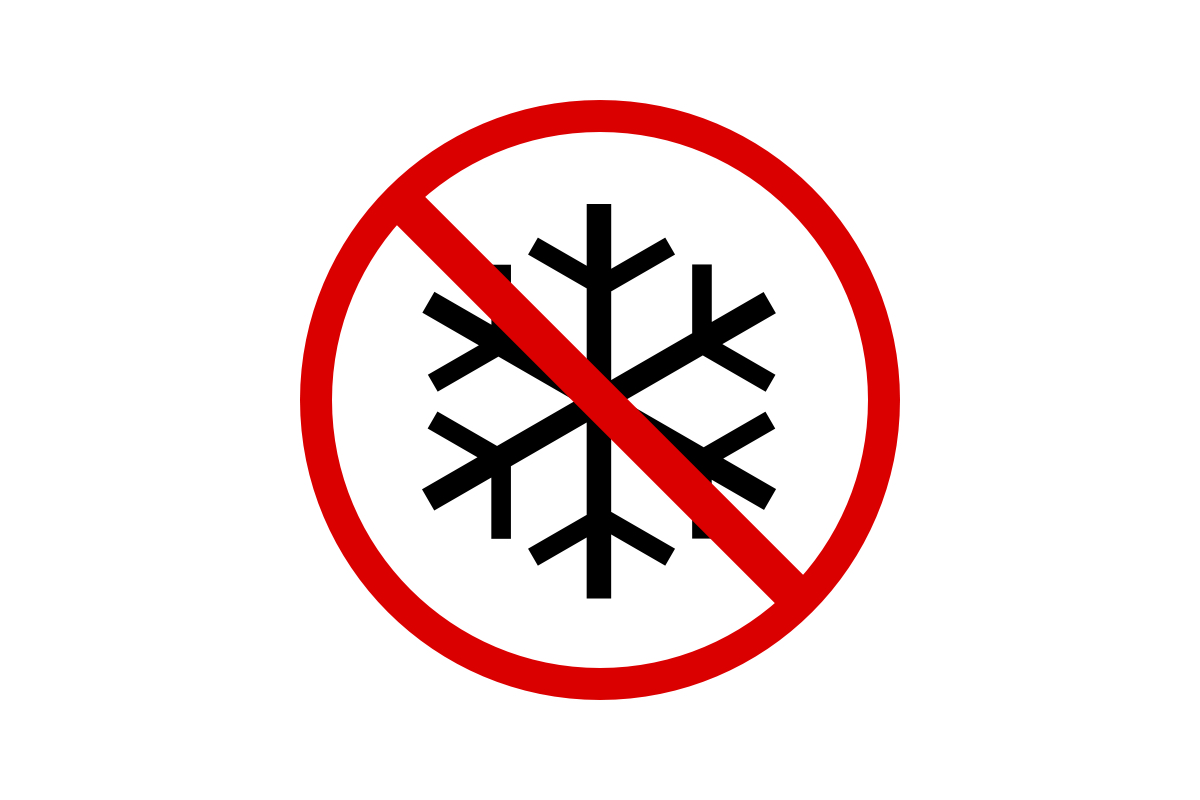 Cell-free allografts are not frozen at any time, but stored and transported in a cool place. Gentle processing avoids freezing damage to the cell-free tissue.

Cell-free human heart valves are always implanted with a more or less long piece of the adjacent vessel (ascending aorta, truncus pulmonalis) that carries the valve.

Sarikouch et al (2019) investigated the postoperative immigration of cells into decellularized allograft. The relative histologic score (100% corresponds to complete cellular restoration) in samples that did not exhibit endocarditis (n=6) was 76±4%. Intracellular procollagen type 1 was found in the mesenchymal recipient cells. In endocarditis samples (n=5), the histological score was significantly lower at 48±7%, associated with leukocyte infiltration and matrix degradation. A cell-free pulmonary valve showed an immune system related graft failure. Allografts sampled in the first 12 months post-op showed a thin colonization of the media. In terms of the degree of restoration, no difference was found between a cell-free aortic or pulmonary heart valve.
“Early Insight Into In Vivo Recellularization of Cell-Free Allogenic Heart Valves”
Download

Boethig et al (2019) describes a total of 235 patients, 121 of whom were prospectively included in the multicenter ESPOIR observational study (2014-2016). The study group was compared with similar cohorts (propensity-matched) who received a conventional allograft or bioprosthesis. Decellularized allografts showed fewer adverse events than the control groups during the observation period.
“A European study on decellularized homografts for pulmonary valve replacement: initial results from the prospective ESPOIR Trial and ESPOIR Registry data”
Download

Horke et al (2020) describes a total of 223 patients, 144 of whom were prospectively enrolled in the multicenter ARISE observational study (2015-2018). The study group was compared with similar cohorts (propensity-matched) who received conventional heart valve prostheses or underwent "Ross surgery". Decellularized allografts showed fewer adverse events than the control groups during the observation period. Cell-free human aortic valves with a long vascular component are a therapeutic alternative for valve replacement in combination with the replacement of a dilated ascending aorta (Tudorache 2016).
“Early results form a prospective, single-arm European trial on decellularized allografts for aortic valve replacement: the ARISE study and ARISE Registry data”
Download

Replacing the aortic and pulmonary valve

This video gives a detailed insight into the implantation of a cell-free aortic allograft as a complete root replacement.

The video shows a real surgical situation and may perturb non-professionals.